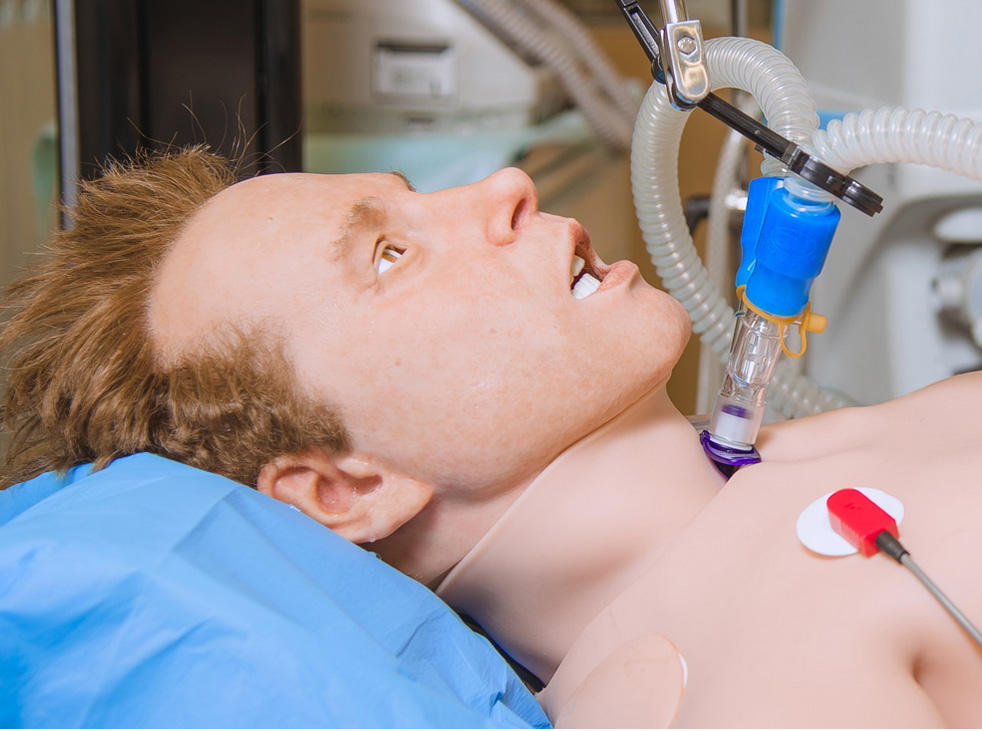 We were given the opportunity to explore the new Leonardo manikin from MSE-Group for a week recently.  Due to the C-19 Pandemic the number of staff looking at the equipment wasn’t as many as I had hoped.  However, here are some initial thoughts on the manikin.

Weight.  The weight of the is 60Kg, which is nice and offers healthcare staff the chance to carry out procedures (where necessary) with more than one person.  For example ‘log-rolling’,  examinations etc, would need realistic numbers to move the ‘patient’ as it would do in real life.

Face/head. The face/head as some great detail added to it, including pimples and moles, something not seen in many manikins outside of ‘lifecast’ a nice addition to assist with the psychological fidelity of an event.  That emotional and psychological ‘buy in’ from staff is important and a lot of the competitors just do not cut it when it comes to that type of realism.

The head has a number of features that other manufacturers do include, for example, pupil reaction, sweating, crying, frothing at the mouth etc, having had manikins in the past that had the ability to produce fluids like this, and not really using them, I am unsure of how useful this would be for us in this centre. Especially where a quick spray bottle (with a little added glycerine) would create the beads of sweat necessary and stay on the face rather than run down it.

Pupil reaction however, is an essential part of any high fidelity manikin that this can be controlled by the instructor tablet quite easily, as well as the reactions of the eyelids.

An extremely nice feature in Leonardo is the articulation of the head and neck.  Most other manikins have a limited range of movement, turning the head left or right and conducting a ‘head-tilt/chin-lift.  Leonardo has an exceptional range of movement bending right, left, up, down as well as turning of the head.  This is an extremely useful feature if ‘proning’ the manikin in today’s c-19 climate.

All common airway adjuncts have been catered for, I-gel, ET tube, OP/NP airways, although to truly utilise some of these and gain a response the settings have to be tweaked slightly in the instructor UI.  I-gel being an example of this when bagging, requires extra settings to ensure chest rise and fall and response on the system.

Front of neck access is also able to be achieved, however, as always consumables will be required for this.

Chest. Not as bulky as some, not as thin as others.  Leonardo has a decent sized chest with all the features you would consider important.  There is a fundamental difference however here, heart, chest and bowel sounds all come from RF tags under Leo’s skin and connect with a device attached to your standard stethoscope.  Although this does slightly take away some of the fidelity, it more than makes up for that in the clarity and breadth of sounds it can produce.  The challenge is to ensure that the scope is placed in the right area to pick up the connection.  Something that the external device offers assistance in as a flashing light when in the right place.  Useful for teaching junior staff both the sounds and the positions.

The clarity of sounds however, including the heart sounds is impressive.  There are no ‘internal working’ sounds to pick up so you can focus your examination on exactly what you are trying to hear.  Although we didn’t, sadly have the opportunity to ventilate Leo, he is ventilator compliant ‘straight out of the box’ which makes this a contender for many of the other manufacturers within healthcare simulation.

As with most of these manikins you can recreate the standard pneumothorax issues with Leo and treat them effectively.

Limbs.  Leo has full articulation of his limbs, resulting in the ability to prone the manikin easily, sit in a chair and manipulate him for various reasons.  A useful addition in my eyes.  However, because of this, the cannula that sits in his right arm is slightly lower than in the ACF.  Understandably, that couldn’t be in a position that would be moved around significantly and therefore it sits in the forearm.  The cannula itself is ‘dry’ in that you cannot put fluids through this, which is slightly odd, given the need of simulation to replicate patient conditions and giving medication and fluids through a cannula is needed.  Any sim tech receiving this manikin will alter that as soon as they get it by creating a ‘fix’.  The question really is, why has the company done this?

RF connectors come into play again with Leo, like a well-known competitor, he comes with a bank of RF connectors that will interact with the manikin to prompt and seamlessly move simulations on.  However, for some of us that have had this functionality before, this is not a game changer, if anything we never used it, preferring to use a proper ‘pre-filled’ syringe on the equipment and running scenarios ‘on-the-fly’ due to the complexity of building these and then the unknown factors of the participants themselves.

Interchangeable limbs.  Leo also has some trauma limbs too, where if the system is primed with ‘blood’ like fluid this can be pushed through the trauma limb to simulate bleeding.

Removing limbs. Extremely easy to remove the limbs here, a press of a button slide the limb out slightly, disconnect 2 cables and job done.  Easy and simple, no tools, no reaching inside the torso and ripping your hands to shreds like some other manikins out there.  Easily disconnected and reconnected, nice.

Groin area.  Interchangeable genitals is standard, but a nice touch here is that Leo can easily produce urine with very little effort for those areas that need to be able ot monitor urine output.

Pulses.  Good pulses throughout the body in all the standard places that react to physiological changes, so if the BP drops, the peripheral pulses will prompt your candidates to explore further issues.

Seizures.  Leo does demonstrate seizures, as do most of the competitors on the market and his is no different, with the shaking of the arms and legs during an event, this is just noticeable if you are looking for it or happen to be touching him at the same time.  A good pre-brief may help with the identification of this if your scenario contains this type of event.

Cyanosis.  Interesting cyanosis here on Leo, it is difficult to demonstrate cyanosis effectively on any manikin, Leo is no different he has blue lights in his fingers and up his nose to offer that indication of cyanosis, again something that a good pre-brief will pick up on and not make the participant wonder what is going on.

Computers/instructor tablet/vital signs monitor.  The Instructor UI is surprisingly simple to use with your finger as a touch screen monitor.  The buttons are relatively large meaning that someone with chubby fingers can easily control the system without accidently picking something else.  It is clear and easy to navigate, even to the untrained person.  It has all of the standard things you will find in a manikin UI, however, a nice addition it the ‘connections’ tab.  Here you can see all of the items and peripheries that may be connected and will display either a green tick or red cross depending on its status, even the stethoscope add on is included here.  It also shows the level of battery if the items is rechargeable.  This is useful to plan you training and even more so if you are trying to diagnose a poor connection.

You will get a choice of large static monitor or smaller more portable surface pro, depending on needs.  For me portability for ‘in-situ’ work is best, and I can purchase an extra monitor should I wish, the difficulty would be surface pro’s are renowned for not having enough ports full stop requiring a hub in most cases.  Personally I would like to see what the packages include and be able to pick and mix as I see fit, then purchasing ‘extras’ when we have a little more funding.  So for example I would go for surface pro vital signs tablet, but then have a larger static one in the sim suite when I can afford to purchase it.  The same with other things like the trauma limbs, etc.

There is also a virtual anaesthetic machine available in the software package (I cannot recall if this cost extra).  Which may be useful for anaesthetic trainees using this equipment.  Changes made on this impact the manikins responses.

Two things that absolutely need to be addressed and I am sure that these are already in process.  1.  A movable case, the ability to protect the manikin and yet transfer him around easily, which should also contain protection for the various tech that needs to make him work.  2.  A longer power cable from the manikin port to the  AC transformer, completely bizarre that its length is where it is, the transformer pulls on the port cable and will reduce the lifespan to weeks not years.  This needs to be a good 2-3 meters in length allowing for the ability to manipulate its position when in use.

Blogging/Vlogging & Podcasting have all become relatively mainstream now as a method of conversation, and stimulating thought processes. Carried out correctly we can find ourselves exploring avenues that we haven't before, or thinking about things very differently. This is a good thing. It's a good thing because we can often stagnate in our roles, only ever knowing one way of achieving something. Using the experience around you, either internally or externally can allow for a richer understanding of the subject and build incredibly effective and mutually supporting relationships.

We should never be afraid to blog and engage with others.